By Fisheries Survival FundJuly 26, 2021No Comments

July 26, 2021 — The following was released by the Fisheries Survival Fund:

On Tuesday, July 20, scallop fishermen and industry advocates called for changes to proposed offshore wind leases in the New York Bight. In an online call with Bureau of Ocean Energy Management (BOEM) officials, industry representatives highlighted the need for a buffer zone to protect the most valuable scallop area in the Mid-Atlantic and expressed concern over environmental and fisheries impacts of offshore wind development generally. Proposed lease areas need to be thoroughly re-evaluated to reduce impacts to scallops and scallop fishermen, who operate in the most valuable federally managed fishery.

The Port of New Bedford often comes to mind when thinking about the scallop industry, and rightfully so since it is America’s highest-value fishing port. But the fact is that coastal communities from Massachusetts to Virginia depend on scallops. According to the New England Fishery Management Council’s 2021 Scallop Fishery Management Plan update, Atlantic scallops comprise the majority of landed value in eight of the largest East Coast fishing ports, and over 40 percent in four others. 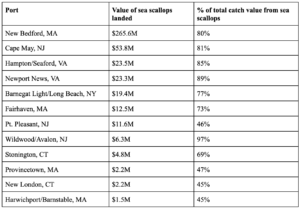 Damage to the scallop industry will have far reaching consequences for working families in ports throughout the Atlantic coast. The harm will extend beyond fishermen and processing plant employees – many of whom are recent immigrants – to fuel docks, marine equipment suppliers, restaurants, and markets. Coastwide, scallops were worth well over half a billion dollars to coastal economies in 2019 and nearly three-quarters of a billion dollars when taking into account their processed value. And this does not include the additional economic value added by the remainder of the supply chain until the product ultimately reaches consumers in markets and
restaurants.

One of the most consequential concerns expressed by fishermen on the call was the need for a buffer zone between the southeastern edge of the Hudson South Lease Area and the Hudson Canyon Access Area (HCAA). Stakeholders argued in favor of a five-mile buffer zone, which would help protect the HCAA from the negative environmental effects of offshore wind development. According to estimates in a published scientific paper lead-authored by the lead federal scallop scientist, the HCAA has added well over a billion dollars in revenues to coastal communities in the last two decades.

Offshore wind presents many potential environmental threats to marine ecosystems. The assembly of turbines displaces large amounts of sediment on the seafloor, creating scour and sediment plumes that can interfere with scallop growth and filter-feeding processes. The turbine arrays themselves can disrupt ocean currents and thus scallop larval flow and settlement. Wind farms create habitats for other filter feeding species like mussels, which compete for available phytoplankton, change the biological makeup of the surrounding area, and interfere with the sustainability of the resource. Young scallops also face increased predation from marine life known to proliferate in wind energy installations such as starfish and moon snails. Seismic activity involved in wind farm site assessment activities has also been shown to damage scallops.

During the meeting, representatives from both the scallop industry and the Port of New Bedford argued that BOEM has been more responsive to concerns of wind developers and other ocean user groups like the military and commercial shipping interests than to those of fishermen. They called for in-person meetings with fishermen to discuss impacts from the proposed wind lease areas. By conducting meetings strictly online, BOEM is excluding many fishermen who are not accustomed to and well-equipped for Zoom and other online platforms. Meaningful personal engagement is necessary to ensure equity and reduce negative impacts of offshore development in the New York Bight area.

While the Fisheries Survival Fund appreciates that new jobs in coastal communities and economic growth could accompany offshore wind development, the benefits should not come at the expense of those who have historically relied on the scallop fishery to provide for their families. The Fisheries Survival Fund hopes to engage in meaningful, honest discussion with both developers and BOEM to mitigate impacts, preserve access, and protect the livelihoods of fishermen throughout the East Coast.

About the Fisheries Survival Fund
The Fisheries Survival Fund (FSF) was established in 1998 to ensure the long-term sustainability of the Atlantic sea scallop fishery. FSF participants include the vast majority of full-time Atlantic scallop fishermen from Maine to North Carolina. FSF works with academic institutions and independent scientific experts to foster cooperative research and to help sustain this fully rebuilt fishery. FSF also works with the federal government to ensure that the fishery is responsibly managed.